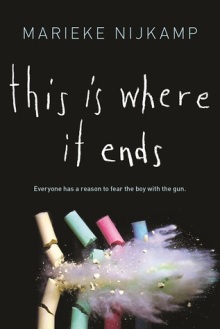 Title- This is Where it Ends
Author- Marieke Nijkamp
Published-  2016
Genre- YA
Length- 285 pages
Rating- 2.75/5
Synopsis (Goodreads)- 10:00 a.m. The principal of Opportunity High School finishes her speech, welcoming the entire student body to a new semester and encouraging them to excel and achieve.

10:02 a.m. The students get up to leave the auditorium for their next class.

Told from four different perspectives over the span of fifty-four harrowing minutes, terror reigns as one student’s calculated revenge turns into the ultimate game of survival.

Review- I didn’t really enjoy this book, not because of the topic, but because it was badly done.

Firstly, some really basic things were annoying. Right at the start a lot of characters were introduced in quick succession, there were also several brother/sister combos, so when they were all introduced so quickly it was tricky to remember who was related to who. Also two of the characters had names that could be confusing, “Far”, and “Autumn”. Yes capital letters were used but with “Far” particularly, it wasn’t until his name was used three times that it was clear he was a person rather than a distance. The name of the school and town, “Opportunity”, was also just ridiculous.

The characters were all very self-indulgent while trying to pretend not to be. There was also far too much teen angst, and fake “love”. That is typical of YA books but I find it so annoying. Teenagers are not “in love” with everyone they date, they have no idea what romantic love even is. In the thoughts and dialogue of several characters there were also a lot of attempts at being “deep” that were not remotely deep.

There also wasn’t really much information about the shooter. A review on Goodreads described him as one dimensional and I would agree. He was depicted as evil with no real explanation as to what had made him snap, there was a bit of discussion, but not enough.

I thought a couple of parts in the book were a little racist to be honest. The entire description of one girl was that she was black, yet with non-black characters their personality, or some memory/story about them was included in their description. Also, despite being a pretty major character, Far was described as speaking in “the language of his parents”, why not just say whatever language that was supposed to be?

I found a lot of the plot unrealistic. What on earth is the floor plan of this school? Or the auditorium specifically? What kind of weird windows do they have? The way people were described as moving around the auditorium seemed very odd. Also, if a guy is standing there waving a gun around who phones someone right in front of him to say that is what is going on? Multiple people apparently. Doing it covertly, fine. Making a call from your pocket and leaving the line open so whoever is on the other end can figure out what is going on, fine, but blatantly doing it in front of everyone including the shooter? No. That just doesn’t happen. The actions of so many characters were so unbelievable. Some “stupid” actions had a purpose, like helping others, but some were stupid for absolutely no reason and just not an accurate depiction of how people behave in situations like this.

There was also a bit of a Save the Last Dance rip off when it came to how a parent had died. The big “reveal” of what the shooter had done to another character in the summer was obvious literally from the second it was mentioned that there was an issue.

If you are twelve you might enjoy this book, it is YA after all. As an adult though I can’t see past the huge problems it is riddled with.

6 thoughts on “Book Review- This is Where it Ends”